Prostate cancer will affect 1 in 9 American men in their lifetime. It's the second leading cause of cancer death among men, resulting in a little more than 80 deaths per day.[1]

And the even better news? Technology has advanced in recent years to provide more powerful diagnostics, particularly in the area of MRI fusion biopsies.

This brings us to today's post. In honor of Prostate Cancer Awareness Month, we sat down for a Q&A with Dr. Michael J. Curran, who is the CEO of Greater Boston Urology. Dr. Curran will answer questions regarding prostate biopsies, including the benefits of 3D MRI fusion biopsies.

Q: First, let's discuss biopsies in general. When does a patient need a biopsy of the prostate?

CURRAN: If a patient has an elevated PSA (prostate-specific antigen) and/or a palpable abnormality on their prostate gland, these patients will have the option to have a biopsy of the prostate. But let's back up a moment and talk about biopsies in general. 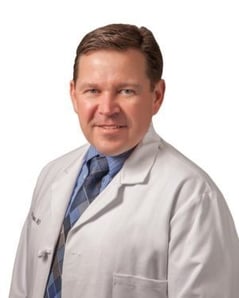 Up until recently, when someone met the criteria to have a biopsy of the prostate, the typical process involved performing an ultrasound study of the prostate and inspecting the prostate to see if we could spot anything to target. The prostate gland's location and the limits of the technology make it difficult to get a precise view, however. We'll see a targetable lesion by ultrasound probably less than 10 percent of the time. And when we target that, it still might be 50-50 whether we find cancer in that lesion or not. So 90 percent of the time, we will need to "randomly" biopsy the prostate to see if cancer is there.

Historically, the only cancer that has been "blindly biopsied" has been the prostate. And that was the best we could do, given the technology.

But this has since changed, thanks to 3D MRI fusion biopsy.

CURRAN: In the last several years, we have seen increased interest in using MRI to evaluate the prostate. We've also seen advances in MRI technology that give us clearer pictures of the prostate gland. As such, we've created criteria that the radiologist can use to find specific lesions in the prostate that we should be targeting for biopsy.

But MRIs still pose challenges. The biggest issue is that it's very difficult to do a targeted biopsy on an MRI machine. The equipment alone would need to be highly specialized since we'd be performing the biopsy while in a magnetic field.

So the goal was to find a way to localize the lesions that we see on an MRI, but use something in an office environment that's readily available, like ultrasound, to do the targeting. So the idea was to "fuse" the MRI images (which are taken ahead of time) with an ultrasound that is done live in the office. If you can fuse those, then you can target a lesion for biopsy.

That's how the 3D MRI/ultrasound fusion biopsy came to be.

Today when we get an MRI from Shields, the radiologists provide us a scale that's rated 1 through 5, known as the PIRAD score. This is based on the radiologist's visual interpretation of the MRI as well as objective criteria (e.g. water density, blood flow parameters, etc.) that differentiate tumor cells from normal cells. As the PIRAD score increases, the likelihood that you'll find cancer in that lesion will increase.

Q: In addition to the increased accuracy, what are some of the other benefits of 3D MRI fusion biopsy?

CURRAN: The benefits are many and include the following:

Typically, our patients are very happy with the technology because we can show them on the screen what their prostate looks like and what appears suspicious. We can give them a picture that shows us taking a biopsy of the suspicious area. The patient then knows that they got the best care possible.

In addition, 3D MRI fusion biopsy allows us to decrease the number of overall biopsies since we can now better determine who, in fact, would truly benefit from a biopsy. At Greater Boston Urology, we've adopted criteria to decide who should have a 3D MRI fusion biopsy.

Q: Can you tell us more about the criteria?

CURRAN:First, let's quickly review the indications to do a prostate biopsy: either an elevated PSA or a palpable nodule on the prostate. Now, here are our criteria for determining who should get a 3D MRI fusion biopsy:

We are finding a significant number of patients were under-staged at the time of their initial biopsy and that they're in need of moving from active surveillance to a treatment pathway. (Nationally, one third of all patients on active surveillance will eventually need to seek therapeutic intervention.)

A normal prostate is between 20-30 grams. If someone has a prostate that's 80 grams or bigger—and the patient has never had a biopsy—we believe that patient would benefit from having an MRI first to see if there's something to target while that person undergoes a biopsy.

Q: Are there any downsides to 3D MRI fusion biopsy?

CURRAN: MRIs are not one hundred percent perfect, which means we still find cancers in areas that look normal on MRI. In other words, a patient could have a clean MRI where we do not see a targetable lesion. The patient thinks he's OK, but he might not be. He might simply have a cancer that's still invisible to the MRI. This is why we don't use 3D fusion biopsy on everybody—it's not one hundred percent perfect.

Another important point: not all urologists are trained in 3D MRI fusion biopsy. At Greater Boston Urology, we have designated three specific physicians who have done additional training and have spent hundreds of hours gaining expertise in utilizing this technology. We have been very fortunate to be in an integrated urology group that allows us to make sure all of our patients, regardless of which of our offices they go to, can have access to this type of technology and the expertise our doctors have gained in doing the biopsies.

DR CURRAN: The biggest challenge we face with insurance companies is that they are making it harder for us to get MRIs. I have heard countless stories from urologists having a hard time getting MRIs approved by insurance companies, which ends up being a roadblock to using the technology.

At GBU, we have good success at getting approval for our patients' MRIs. When we explain to insurance companies that this is not a random request, we have the guidelines discussed above, and we're using this technology in an effort to reduce the number of people having biopsies overall, then they typically will approve the MRI.

Again, it's because of our integrated group practice of urology that has allowed us to have these conversations with insurance companies and to provide this service to our patients.

CURRAN:We were the first group in New England to perform 3D MRI fusion biopsy with a system called Artemis. This was approximately six years ago. In 2015, we upgraded to the Invivo UroNav system.

We have three physicians trained and certified in 3D MRI fusion biopsy: Dr. Geffin, Dr. Lin, and myself. We also have an ultrasound manager, Shane Kolton. He's a true equipment specialist who supports the doctor in every procedure. It's an incredibly strong team.

Q: What else would you like readers to know about 3D MRI fusion biopsy?

The other area involves the issue of under-staging, which I mentioned earlier. For patients who have been told they can go on active surveillance, we're finding that some of them had cancers that were under-staged. The reason for the under-staging is related to the Gleason score.

The Gleason score is a number from 2-10 that the pathologist gives us that tells us how aggressive the cancer is. If it's 6 or less, it's not very aggressive. If it's 8 or higher, it's an extremely aggressive disease. And if it's 7, it's intermediate.

Q: If a reader is interested in a 3D MRI fusion biopsy, what should they do?

DR CURRAN: Talk to your urologist about whether 3D MRI fusion biopsy would make sense for you. If you are a patient outside of GBU, we're more than happy to work with your urologist to provide the technology and then return you to your doctor once the biopsy is done.

If you're currently a Greater Boston Urology patient, we'll definitely discuss the criteria with you. (You can visit the GBU website to schedule an appointment.)

Bottom line: we can provide the technology to anybody who wants it, provided he fits the criteria.

If you're in a narrow network that has out-of-network benefits, you can come to see us with a referral, and your co-pay and deductible may be slightly higher than if you were "in network." And if you have Medicare, Medicaid, or a PPO, you can come see us.

Thanks for your time, Dr. Curran.